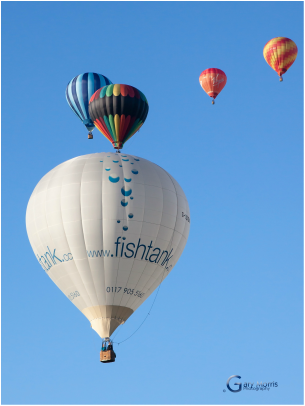 Bristol in South West England could be condsidered to be the ballooning capital of the United Kingdom due to the amount of Hot Air Ballooning
activity that can be witnessed in the city during the better weathered months of the year. Add to this the location of balloon manufacturer Cameron Balloons in the city and it is also the location of the Bristol International Balloon Fiesta.

Held annually in August at the Ashton Court Estate , the Bristol International Balloon Fiesta could be considered one of the largest in europe and attracts hot air balloons from all over Europe and Worldwide.

This free event, in 2015, saw the 37th event held from 6th-9th August and provided four days of spectacular events from the hot air balloons,
stalls attractions and activities, together with an extensive funfair, to keep all members of the family entertained.

There were over 500,000 visitors over the course of the weekend, helped by the prospect of good weather to allow the balloons to launch, and the attraction of the ever popular nightglows, where tethered balloons light their burners in time to music. After the initial special shapes launch on Thursday 6th, balloons were launched at 6am and 6pm each day, with a few morning launches seeing in excess of 100 balloons lift off from the Ashton Court estate in a short space of time.Even the low cloud and light rain on Sunday evening did not fail to dampen both pilots and visitors enthusiasm.

The Bristol Balloon Fiesta is one of the most popular summer events in the UK and 2015 was no exception. We all now look forward with great anticipation to this great event
returning in future years.